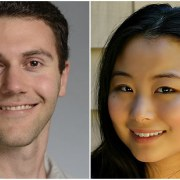 This grant allows two American Fulbright students to travel throughout their host country to explore the culture and interact with different communities. Activities may include conducting interviews and/or research, visiting new regions of the country, and attending educational conferences or workshops.

Arthur King Peters was a 1940 graduate of Cornell University; he went on to serve during World War II as an officer in Army Counter-Intelligence. He later received a Ph.D. in French literature from Columbia University. During the 1970s, while running his own importing business, A.K. Peters Co., he taught French at Hunter College in his lunch hours. He was a translator, author and critic. Five of his books were published, including ''Jean Cocteau and His World,'' and ''Seven Trails West.'' He served as President and Chairman of the French American Foundation in New York from 1977-83. He was decorated with the Chevalier de l'Ordre des Arts et des Lettres by the French government in 1978, and received the Chevalier de la Legion d'Honneur in 1984. He passed away in 2001.

Harry Lang is a PhD candidate in Mathematics at Johns Hopkins University. His thesis focuses on topological data analysis and streaming algorithms for computing statistics on massive datasets. Outside of mathematics, he collaborates with researchers from computer science, physics, and statistics. He graduated from Columbia University in 2012 with degrees in mathematics and physics.

Fulbright Project Summary:
"I have been working with researchers at the DataShape lab at INRIA Paris-Saclay to develop new algorithms for Topological Data Anaysis (TDA). During the first three months I further explored the theoretical foundations of TDA and identified several bottlenecks of existing methods. My current work is resolving these bottlenecks by developing improved algorithms for the foundational tools used in TDA, with a special focus on single-access algorithms (where an enormous dataset is processed by allowing only a single access to each datapoint). One of my results this year is a new low-space algorithm for clustering data with the single-access setting; this is the first improvement for this problem since the “merge-and-reduce” technique that was introduced in 1980. My ongoing projects include a tool for maintaining a “data summary” whose size is independent of the size of the input; current tools that maintain data summaries depend on the size of the input, and these techniques become infeasible for extremely massive datasets."

Jean Guo is a researcher at Hospinnomics, a joint initiative launched by the Paris School of Economics and the public hospital system in Paris to produce policy-oriented research within the hospital setting. She is working on various research projects focused on evaluating and improving healthcare access for vulnerable (including immigrant and indigent) populations in France. She is also a current Master’s Candidate in Health, Population, and Social Policy at EHESS. She graduated from Stanford University with degrees in Human Biology and Economics in 2013, and worked as an analyst in healthcare and economic consulting at Analysis Group. With an interest in public health, economics, and policy, she has previously conducted research on the oral polio vaccine at the Stanford University School of Medicine, worked as a health policy intern for former Assistant Surgeon General Susan Blumenthal, and consulted for the Pan-American Health Organization.

Fulbright Project Summary:
"I have been working on three projects in order to bring a more comprehensive approach to my main research objective of improving healthcare access and quality for immigrant populations in France. With ISM (Inter-Service Migrants), I am working with an organization that provides linguistic interpreters for the majority of public institutions in France. On one end, I am doing quantitative analysis on a large database to understand trends in demand for these services over time, by region, and by type of service in the last 10 years. From another perspective, and in line with my master’s program, I hope to launch a smaller qualitative study to assess the nuanced socio-cultural factors impacting interactions with interpreters and demanders of their services that can be obtained through qualitative interviews and observations. With Voisin Malin, I am working to analyze data that sampled communities with substantial immigrant populations in the suburbs of Paris. My goal is to evaluate the impact of social integration and resources in the community on the health of the individuals in the study. With PASS (Permanences aux Accès de Soins de Santé), which are intra-hospital units tailored to patients in situations of precarity, I am working with the national director of the program, Claire Georges, at Hôpital Saint Louis to conduct a study looking at the budgetary impact of these patients from an economic perspective."