Visit to the ICOS-Gascogne site 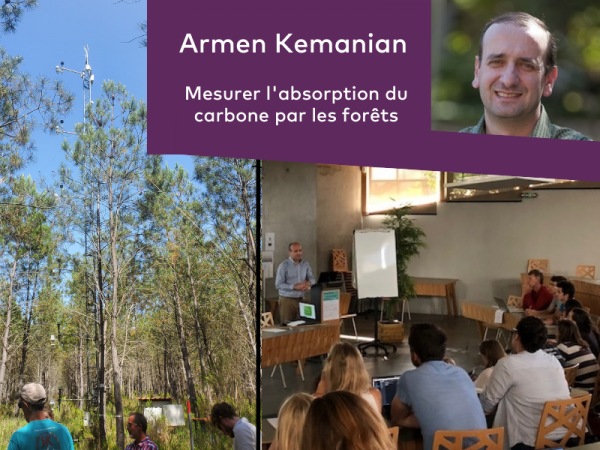 News from Armen Kemanian, research scholar from Penn State University hosted by INRAE-Bordeaux Sciences Agro thanks to a grant from Fulbright and the Nouvelle Aquitaine region.

Dr Kemanian and his colleauges are working to measure how much carbon Aquitaine forests can absorb and the consequences for regulating climate.

"On 15 June 2022, at the beginning of a heat wave in western Europe, two scientists at INRAe and Bordeaux Science Agro, Dr. Denis Loustau and Dr. Jean-Christophe Domec organized a visit to the Integrated Carbon Observation System (ICOS) at the Landes the Gascogne for students and scientists. As Dr. Domec summarized it in a conversation: “These high temperatures are not unusual in southwestern France, but they are unusual in June.” It was a fitting experience – visiting a station designed to monitor carbon and energy fluxes in a week with record or near record temperatures.

The Integrated Carbon Observation System, ICOS provides standardised and open data from more than 140 measurement stations across 14 European countries. The stations monitor greenhouse gas concentrations in the atmosphere and carbon dioxide fluxes between land, water and the atmosphere. The ICOS community consists of more than 500 scientists from more than 80 universities and research institutions. ICOS-based knowledge supports policy- and decision-making to combat climate change and its impacts.

The station at Landes de Gascon is managed by INRAe under the direction of Dr. Denis Loustau and monitors carbon fluxes above a pine plantation. As stated by Dr. Loustau, this station has been in operation for nearly 20 years in a setting that conforms to the requirements of the techniques used to measure carbon fluxes. In a nutshell, the monitoring equipment is placed in above the tree’s canopy to measure the difference between upward and downward carbon dioxide fluxes. To do so, measurements of vertical wind speed (the vertical oscillation of air due to mechanical mixing or buoyancy) are coupled to measurements of the carbon dioxide concentration in the parcel of air. These measurements are done > 40 times per second, producing invaluable information to understand the control of carbon dioxide concentration in the air. Simultaneously, the flux of water vapor is also monitored, obtaining a round picture of the response of ecosystems to warming and other environmental factors.

The field visit was preceded by presentations from scientists including Dr. Loustau and Dr. Kemanian, and a picnic in the shores of the Leyre river in the town of Salles. Modelers like Dr. Kemanian, as well as other scientists use these stupendous datasets for both model development and model testing. Communication between scientists not only through scientific conferences but in the field, with probing questions from students, and in the midst of a heat wave not only strengthen collaborations in a friendly environment: they also underscore the importance of the ongoing work scientifically and for the community at large."

For more information on this project